It is funny how leaving a place can make you pine for it, often even if it is a shit hole & backwards type of place.

While I have never, in my life, considered Portland backwards or a shit-hole. I seem to have more love for it now than ever before. Mind you when I participated in the AmeriCorps✶NCCC in 2003, I am pretty sure I annoyed people with my constant talk of how wonderfully perfect and awesome Portland was/is. I also think this is part of Portland’s problem today; too many people talk about it and move here still, yet at the same time we wouldn’t necessarily be the town we are without those people. As former Governor Tom McCall (1913-1983) said, “Come visit us again and again. This is a state of excitement. But for heaven’s sake, don’t come here to live (1971).” I was born there however, so the pride I feel runs uncharacteristically deep (comparatively to my friends from other places around the globe).

Patriotism and regionalism are something I talk a lot with my students about. Partly because they see patriotism as a bad thing, which basically means that if you are patriotic for the homeland, then you are sympathetic to the far left (read: Hilteresque ideas). This is something I have talked about before, but perhaps not on such a small-scale as regionalism or being proud of the city you live in, like Portland. 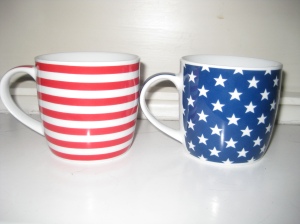 According to Joel MacMillan, in his paper on German patriotism,

“The idea of patriotism and how Germans see themselves is a unique paradox. There is reluctance within Germany to be outwardly patriotic and express a fondness for their country, yet the international community view Germany in an extremely positive light…Dr. Koschut, a professor of American studies at JFK University cites the fact there has never been a period of “consistency” within Germany’s history in which Germans could develop a sense of patriotism. This is because there has been so much  unrest over the years, dating all the way back to the mid 19th century. (2006).”

The closest thing I can equate to regionalism in Germany is having pride in Bavaria and all things that come out of it (Oktoberfest for one) and the exported stereotype, especially to America, is that Bavaria represents all of Germany when any German outside of Bavaria will tell you it doesn’t.

Since arriving in Germany, my husband and I have collected a lot of Portland paraphernalia. We asked for it as a wedding present since we are both from Portland and care for it a great deal. Our friends and family didn’t disappoint! We have acquired a lot… 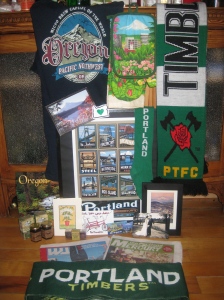 And now Portland seems to be ‘hip’ so hip in fact that shows are now either actually or fictionally set in Portland like the late (and horrible) Free Agents, Grimm and Portlandia. Or the countless movies, television shows and music that is produced there. My husband and I have conversations about Portland ‘jumping the shark’. I understand it might not be possible for a place to do this, as that term generally refers to television shows, but despite my eternal love of my hometown, can it?

In a recent interview with Salon.com, The “Portlandia” guide to Portland Carrie Brownstein (of previous Sleater-Kinney fame, now in Wild Flag), written by Gale O’Hara. The two talk about how Portland “leads the nation in eco-superiority, LEED buildings, recycling and banning plastic, clean sustainable living and has a bicycle industry that adds an estimated $90 million per year to the local economy. Local moms report that the kids at school excitedly lap up Brussels sprouts.”

A first semester (erste, fresher, first-year) student recently asked me if I had heard of this show, “Portlandia” because I was explaining to them what I got for Christmas (green colored “Portland” socks) and how I could never bring myself to buy any of this stuff if I were living in Portland or be as “American-flag patriotic” as I have become since being here (see the above cups as exhibit A). So, I then tried to explain the show to my students:

“It is a sketch comedy show based in Portland, Oregon that is both fun and a little weird. In a way it is like an inside joke for all Oregonians or people living in the Northwest because it really makes fun of the variety of people living there and uses the city as a character itself…” To which I received a lot of blank stares (which unfortunately happens a lot with this class). In the end, I gave all of my students homework, to watch an episode and talk to me about it, even if it was confusing.” In O’Hara’s article, she asks if the these “Portlandia” characters are West Coast Stereotypes, and this is how Brownstein answered:

“Those people are everywhere. We’ve reached a tipping point of an ideological sameness — like Brooklyn, Portland and Silver Lake don’t seem that different. There’s sort of pop culture and this kind of niche culture. They have a similar broad appeal. One person goes to a city and looks for a Starbucks, the other person goes to a city and looks for a Stumptown (Coffee) or something close to it. Both those people exist and both can be satisfied in almost any part of the country. You can go to St. Louis and find a coffee shop that most resembles your Brooklyn coffee shop. It’s an aesthetic, a taste, a lifestyle…This lifestyle has reached a point where it’s OK to critique it now, enough people are living by these rules. You sometimes do think, Is this a better choice (06.01.2012)?”

O’Hara goes on to explain that “Portland is a town, yet Portlandia is a state of mind.” And this town has much to be smug about (as partially mentioned above), we’re quirky, and doing our own thing but doing it collectively. Perhaps this might explain why I have always been the annoying one prophesying about how absolutely rad Portland is was because it was always overlooked both nationally and internationally because there is more going on in Seattle or any number of the towns down south of the state. Yet, that is perhaps what has let us create this niche in the NW, that we were the middle child forever feeling ignored and left to flourish and create our own way of being. With our high unemployment, highly promiscuous, predominately white, kitch-loving selves we have created our own version of Cascadia in a city, in part thanks to all the people that have moved and continue into Portland. An agreement has been made among us I think, even between opposing viewpoints/perspectives that aids in this ‘smugness’ that fifteen years ago was non-existent. As Brownstein explains this position quite well,

“There’s a tacit agreement you make with a city or community like Portland. If you think of Portland as an extension of any esoteric community like indie rock or environmentalists, there’s a very strict set of rules. It professes to be inclusive but really it’s so exclusive. It’s very hard to figure out what rules to follow because they’re so nuanced. The intention here is to be good, but there’s a certain amount of frustration that comes from not knowing how to be good or feeling like you’re not being good in the right ways. So there’s a little bit of passive-aggressiveness, which I guess is what you’re taking about with people overreporting, a city of tattletales.

I remember hearing a statistic that we were a city in a rare position with a high unemployment rate that was continuing to have people move here — because they were moving here not to work. Those are obviously people who don’t have three kids and a spouse. No one is going to take their family to a city where they can’t get a job. But somebody that’s 24 and thinks, “Yeah, I can get by doing odd jobs and living in a group house for $150 a month,” that’s the person who is going to thrive here and check the casual sex box on OK Cupid.”

When I first began college in 1997, roughly all of my friends were locally born and bread (90+%). Two years later, I noticed a considerable shift and by the time I transferred to Portland State University in 2004, the origin of the people I knew had completely flipped. I became excited when I met another local. It wasn’t necessarily bad – except when people would get smug about their ‘bullshit’, because theirs was more cool and more important than mine or anyone elses’ – enter the origin of the west coast hipster, which now emulates the east coast hipster or “insert-your-own-town-here” hipster.

And so, as a parody of ourselves and our neighbors we have ”the dream of the suburbs” (See the original “Dream of the 90’s” here, in case you’ve been living in a cave.)

So where does this leave us, as a city, a community in the larger context of popular culture? Hopefully, all of our accomplishments – which some are discussed in the Salon.com article, will speak louder than any media legacy. For me, I am still in love with this town, the whole state really, it is in my blood I cannot get rid of it. So here-here for regionalism, specifically in the NW…and I apologize to anyone I ever came across as ‘smug’  to because of this local-lovin’ we have a tendency to spread.

One thought on “All Patriotic and stuff…or “Ode to Portland””