National Public Radio’s Planet Money recently published a story about how much a wedding dress actually costs, titled, “Why did my wedding dress cost so much?” I agree with the author that shopping for a wedding dress is a bizarre and emotional experience. I think films and television make it seem either like this awesome experience or a complete nightmare. I say it is something in between!

Weddings are big business because they are expensive and elaborate events. The average cost of a wedding in the UK is £20,000 and
$25, 361 in the US.

One of the most expensive items can be the wedding dress, but why? What are you actually paying for? With the dresses alone averaging $1,124 in the US and can often be more expensive if there is intricate hand work done on the dress. Yikes!

This video clip is of one woman’s experience: http://www.slatev.com/media/swfs/SlateGroupPlayer.swf

This is not at all surprising really.

When my husband and I decided to get married, when he proposed; I was literally leaving on a jet plane to begin a new chapter of my life in Germany. We had planned at the time to just be engaged for a long time. Then we moved to Europe and found a job in Luxembourg. We decided to stay and didn’t want to bear the thought of one of us returning to the US without the other, so we decided to get married when we were both headed home for a visit anyway. This was roughly three months later.

We decided to get married back home because the most important thing to us were with to spend the time with our friends and family. We had talked about have a bonfire and a huge potluck, with a party in my parents beautiful red barn, which might not necessarily be classy, but would be in line with how we truly wanted to celebrate. Since this would likely be next to impossible to plan from a distance, especially since my father would have never gone for the barn idea since it would need port-a-potties, liability insurance, places to stay in the middle of nowhere for all the guests, and a proper cleaning of the barn that I couldn’t help with (and so wouldn’t be fair). So, the next best option that my husband and I could agree on, getting married in the community we used to live in, Sellwood. 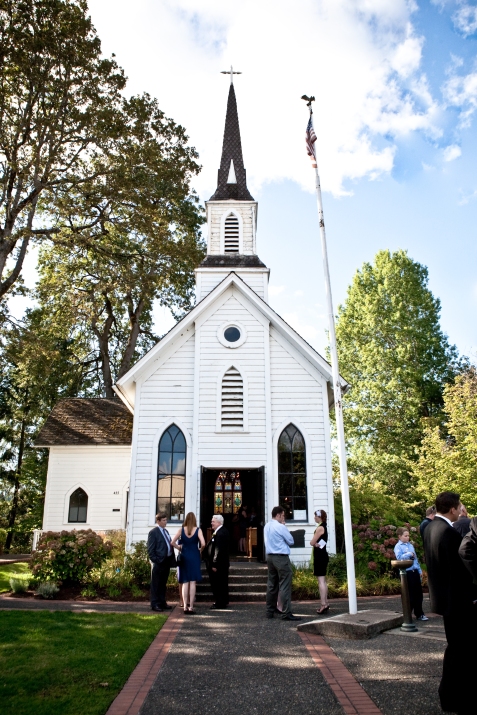 Our biggest cost though, was the photographer. My husband and I both agreed that this should be the most expensive thing because it really is most important to both of us. This after all is how we would remember our wedding. My friend in Victoria, B.C., Antonio LaFauci, whom I met randomly by chance in 2004 at the Sasquatch music festival, was kind enough to come to Portland (good thing he likes our city), stay for the weekend and take some phenomenal photographs of our wedding, for which I will probably never stop showering him with praise. 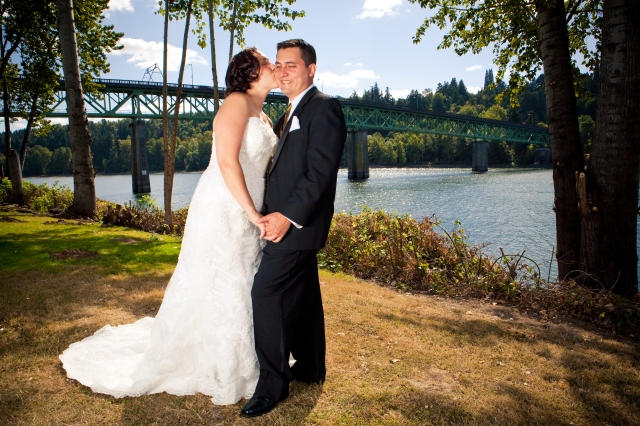 My point is that what we wore wasn’t the top priority and my husband and I both knew that we really didn’t have much of a budget either!

Both of us had lived in Portland for so long that we felt that while this was our wedding, it was also a great time to help showcase the great things are friends do. So our friend was the DJ, another was the caterer and yet another helped with the flowers. We celebrated at an amusement park so that the kids could also have something fun to do when they got bored with the party itself.We even ended early to keep the cost down while still allowing others to move onto other parties if they were do inclined. 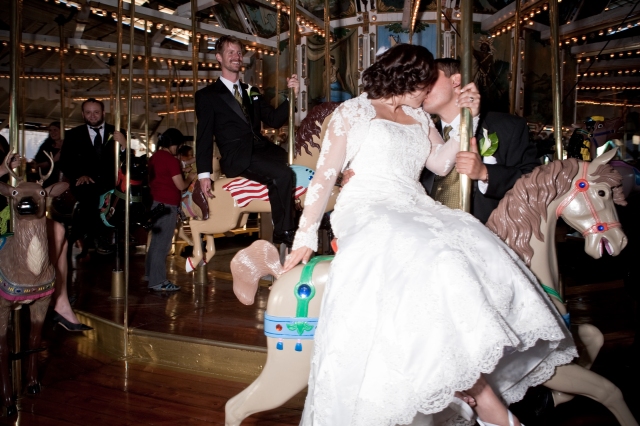 The story of my dress is bittersweet. It was a beautiful yet unexpected find. I had been searching online for a summery dress and found one at David’s Bridal online (only). I wanted something casual and suitable for the day we expected to have. 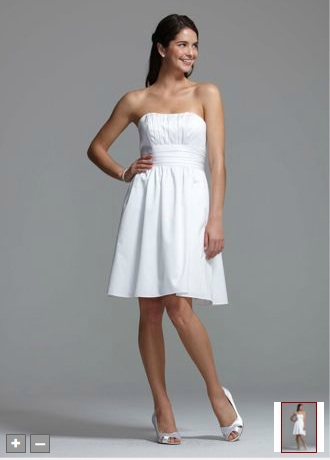 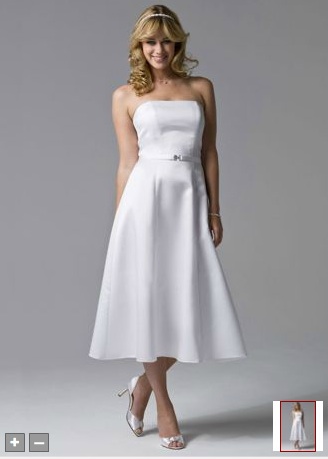 My husbands brother was killed in a random car accident as him and his wife, who was driving were just beginning a cross country journey. We received the call at roughly 3:45 am after an already sleepless night. This brought us home to Portland for a weekend in early July for the funeral. Which allowed for only a few hours to try on dresses for a wedding in just over a month. When we met my mother outside of Portland, near where she lives we were seriously jet-lagged and our eyes were equally tired from mourning. I tried on dresses for three and a half hours, in spite of telling the lady specifically what I wanted (see dress number two above). Tired and weary, after trying on at least ten to fifteen dresses, the attendant brought a super frilly dress with a long train saying, “I know this isn’t what you wanted originally, but you said you were open. So, perhaps you should just try to be open to this one… 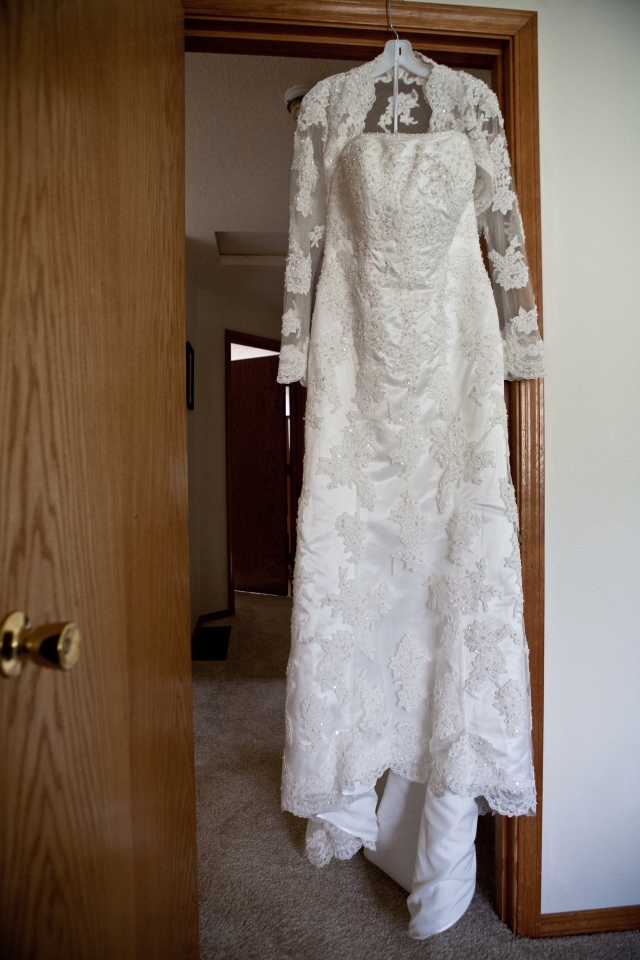 This was a designer dress that normally retails with David’s Bridal for around $1,100 and because the woman that originally wanted it had it altered and then changed her mind, it was marked down to $300. $300!!! It wasn’t what I was looking for in the first place, but it was super elegant and classical – and it fit and was within my budget (it was $300 max). We bought the slip under it so I could walk alright in it for $50 extra. I was not willing to wear a dress more expensive than my established budget price, not only because I could not afford it, but because I knew I was only going to wear it once. I can sew as can all of my aunts, so if push came to shove I would have just worn a dress that one (or all of us) had made. Even if I would have been able to afford a more expensive dress I would have put the money toward toward the food and drinks for my guests.

So, what do you think? If you are married, how much did you or your spouse pay for their dress?

If you are getting married, how much are you willing to spend on your dress?

3 thoughts on “Why did my wedding dress cost so much?”