I like to think and research a lot about the American Dream. It isn’t just a neat and catchy name of an expat blog. The following image is originally from GOOD.is which is full of great news articles and even more amazing infographics! 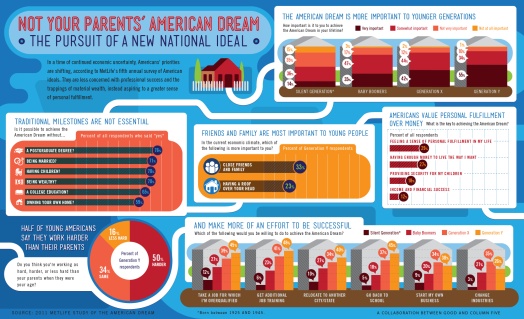 Unfortunately, you will notice too that it says that most Americans feel they are working harder than their parents and are willing to do so, yet are not necessarily reaping the same benefits. Modern Americans, at least up to Generation Y claim that they are more willing than the post war generation to take a job they are overqualified for, to obtain additional training/education (often at their own expense), and relocate. However, Generation Y is slightly less likely to start their own business than Generation X, yet still far more likely than the post war generation.

I think the other point that is telling about this infographic, which does clearly identify the changing American dream even though it is no longer simply an American thing, is that traditional milestones or what people originally thought of as the American dream are not as important. Having a postgraduate degree isn’t as important, either is being wealthy, being married or having children. It makes sense since many Americans see many of these factors as unattainable.

What is your opinion of the American dream, because it is so hard to necessarily nail down specifically. Yes, I understand that Historian James Truslow Adams popularized the phrase “American Dream” in his 1931 book “Epic of America“, which establishes specifics of the dream. In practice however, I think this means different things to different people.

I will discuss more of this later, I guarantee it!

One thought on “Not your parents American dream”