Geert Hofstede defines culture as ” the collective programming of the  mind which distinguishes the members of one category of people from another”, these categories can include one or more of the following: a nation, a region, ethnic group, gender group, generational group, social class, profession or occupational group, a type of business, work or organization group, or family. (Hofstede, 1994)

Culture is further classified into four different realms or elements: symbols, heroes, rituals and values. “Symbols are words, objects and gestures which derive their meaning from convention. […] Heroes are real or imaginary people, dead or alive, who serve as models for behaviour within a culture. […]Rituals are collective activities that are technically superfluous (unnecessary, redundant, unneeded) but, within a particular culture, social essential. […] Values represent the deepest level of a culture. They are broad feelings, often unconscious and not open to discussion, about what is good and what is bad, clean or dirty, beautiful or ugly, rational or irrational, normal or abnormal…These feelings are present in the majority of the members of the culture, or at least in those persons who occupy pivotal positions.” (Hofstede, 1994)

As Expats, we then have a choice to either adopt or ignore that which is not our first culture. To explore and adapt or disregard the second culture. If we as individuals, families, or other collective units determine that the various elements of culture are worthy of exploration and experience then, we, either as the singular or collective unit can create a third culture amalgamating our original, first culture with that second culture in which we live.

In the U.K., this day of remembrance, called Armistice Day, marks the day a ceasefire established between Germany and the Allied Forces, marking the end of WWI. Interesting fact: this truce came to be at the eleventh hour on the eleventh day of the eleventh month of 1918. The day is also known as ‘Remembrance Day’ in the U.K. and other commonwealth of nations, established by British King George V honoring those who died while in the service.

In Germany, November 11th has many names: Martinstag, Martinsmas, or The Feast of Saint Martin. It is a day to celebrate the beginning of Autumn, the preparations for winter are complete (like the origins of Halloween) and when the wine is ready. Basically, the time of the year to celebrate all hard work of the spring and summer and PARTY (thanks wine!), except this was centuries ago when life was much harder, year round.  This did mean though that people had to find their joy where ever they could. Because of its connection to the harvest, in some traditions the day is more like American Thanksgiving, celebrating the earth’s cultivated bounty, and as a mini Karneval, as it falls before Catholic Advent.

As the tradition is understood, this man was a Roman soldier who once ripped his cape in half to help a beggar keep warm. Hence, in Germany, this little party in his honor involves a Roman soldier on a horse, bonfires (“Martinsfeuer”) , sugar-coated pretzels, warm Glühwein and children and their families parading the streets with (often hand-made) lanterns.

The lanterns originated when the children of the village ran through town to tell others of the soldiers’ generosity. Another idea is that the lanterns represent smaller versions of the bonfire. Religiously the lanterns represent the ‘light in the darkness’ of hope, as St Martin brought hope through his good deeds. Children at least generally make their lanterns in school. I assume that the fancy-shaped white bread is a throwback to the candy the children may have once received, not to mention that a) German bread is divine; and b) the lantern parades usually take place before and during dinnertime, so the children must need to eat something. 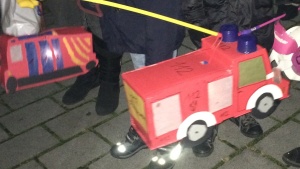 Creative lanterns at our local parade 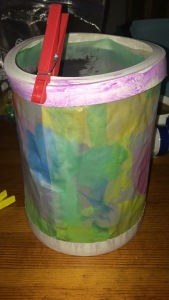 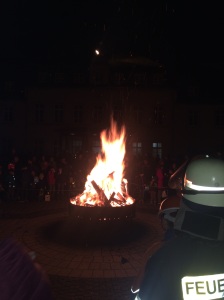 An impressive bonfire at our local parade.

Theory has it that Martin also brought wine cultivation to the region of Touraine, whose capital is Tours, hence the drinking of Glühwein. A traditional meal in German commemorating this day might consist of either roasted Pig, duck, or goose. The goose is significant as the original St Martin supposedly hid in a goose pen to avoid being ordained a bishop. Alas, the Geese ultimately betrayed him, honoring that the wealthier folk cooked and ate goose while those with less means feasted on more readily available duck.

St. Martin of Tours, southwest of Paris,  (Latin: Sanctus Martinus Turonensis; 316 or 336 – 8 November 397) was Bishop of Tours, whose shrine in France became a famous stopping-point for pilgrims on the road to Santiago de Compostela in Spain. He has become one of the most familiar and recognizable Christian saints. As he was born in what is now Szombathely, Hungary, spent much of his childhood in Pavia, Italy, and lived most of his adult life in France, he is considered a spiritual bridge across Europe.[wikipedia]

This history is important, as it helps establish the relationship with Europe, Christianity, and eventually the day that honors him. I can’t speak to how religious most German’s are these days, so I also cannot say how many Germans throughout the country celebrate this day. I am fully aware it is a celebration mainly for children today however. While we were celebrating at a larger party and parade in 2016, we ran into a friend of our son. His parents commented that “in five more minutes we could all leave”, I asked if the night would be over that soon with the bonfire so high. The father remarked that the celebration is more just a thing to do, but not really understand. To this, I retorted that it is something I am actively looking to do, to understand, as we are raising our son here.

This information is additionally meaningful in the Bundesland Rheinland-Pfalz, steeped in Roman and Christian history as it is, with a symbol/hero of St. Martin, and the ritual of celebrating him – at least the children and thus by proxy, their caretakers, as it is a means to share and perpetuate values across the group. For our little family it is not only our first culture values and symbols we wish to pass to our son, but also those collective aspects the second culture we live in has deemed significant. It is paramount that our son, and we, his parents, understand and value both our first and this second culture as equally of merit, thus creating his, or our, own third culture.

Below is a map of a religious pilgrimage through Europe. Part of this pilgrimage, which might be more of a hiking trail to the more secular Germans/Europeans, is the path to the shrine and remains of St James the Great in northwestern Spain, specifically Galicia. This is also where the cathedral of Santiago de Compostela is. The many routes that make up this ‘way’ are marked with a scallops shell, which is a common find on the northern coast of Spain. 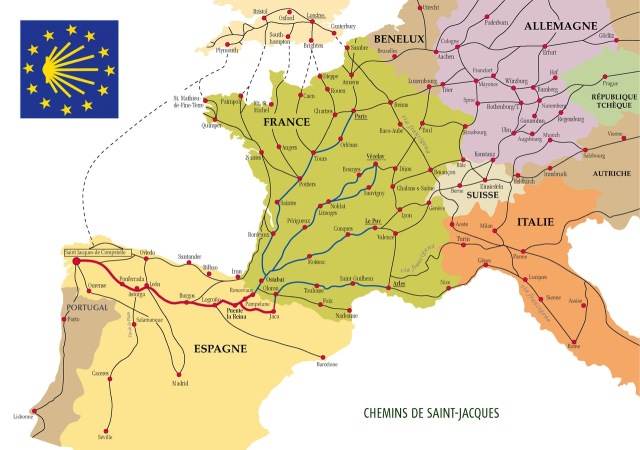 This information thanks to MamaLisa‘s World, which is a wealth of german songs.

Here is the song, in English:

I have learned a few German children’s songs but, after two years I still have yet to learn this one. Hopefully, by next year I will have it down.

Here is a German Children’s song that some lantern parades sing while on procession: “I go with my lantern” (Ich gehe mit mein Lantern):

I need to also learn this song as one of the two celebrations we attended this year had the children and their parents singing this last song.