This post won’t be too long today, I promise.

Ultimately, this post gives me an excuse to share with you a few articles from Cracked.com that are hilarious and full of stereotypes of both the country they are supposedly from and about Halloween itself. Now, don’t get me wrong, Americans have their very own take on this awesome day and have had about a hundred plus years to perfect it too.

Halloween is one of my favorite days of the year, other than my birthday and Christmas. I think it is because deep down, I am greedy and selfish. I like presents and sweets far too much, even as an adult. No, actually I think that only applies for my birthday, Halloween and Christmas rock for different reasons. Christmas because it is the one day that our family comes together (traditionally) and we celebrate each other. Plus, growing up we had the added bonus of a long break off school (two to three weeks). Furthermore, the decorations and the music just get me excited and if there happens to be snow, oh my – fa-getta-bout-it! Needless to say living in Germany, where snow is a sure thing and Christmas is an awesome winter market with glühwein (minus the hordes of tourists) – woohoo!!!

Halloween is special because it is the one day in the year that (American – and increasingly others) society say it is okay to dress up and make-believe. It is the one time of the year that it is okay to be a demon, a nightmare, a dream or a fantasy. In the US, increasingly it is the day young, often college age women seem to think it is the day they can dress up like a slutty/tramp for the day and it is okay because it is Halloween. Part of me says yeah, that is okay but another part of me says, “NOOOOOOOOOOOOO!”

Favorite things I have been (and been well) in the past include:

Here the lack of a better picture is very disappointing to me because Marla’s outfit was perfect! It was a horribly (obvious) fake fur coat and some blue scratchy one-shouldered disco dress from the 1980’s. In other words, perfect!

Emily, the Corpse Bride (my friends didn't even recognize me)

It’s a good thing you cannot see my husbands full face in this picture too, since he didn’t so much look like Morticia’s husband as he did a rather round, dead Hitler.

At least he is willing to pair costumes.

The back story to this one is that I was killed by another waiter who wanted my shifts. She stuffed me in the basement and I came out on Halloween. I was told that if children or families complained I would have to change. No one did (LOL) and I was still technically wearing my uniform.

Finally, when I was Marla, my date for the night was ‘Jack’ (of course). He asked me to help him with his costume so I thought I should practice on myself first:

I obviously like playing with makeup. When I was a kid and my sister and parents would go to work. I would play a game with myself and my sisters makeup. I would get into her stuff, especially her makeup because she just had so much of it. I would make myself look old, or dead, or sickly, or whatever else I could think of. I loved it. The best part of the game was putting everything back in the same place so she wouldn’t notice I was messin’ with her stuff. It was a very passive aggressive  way for me to get back at her for being such a big pain and I had fun.

…and my most favorite thing to be is dead:

I even have contacts now to help with the eeriness! And I am always looking for good fake gashes that I can cover in blood to make people think they look real… 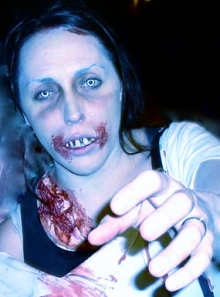 So, even though we live in a country that does not really practice this specific ‘holiday’ (they do, but it just happens in February before Lent). We will likely be celebrating tonight and even if you weren’t a betting person, you could probably place a bet on what I would be…

And for your stereotypical reading pleasure, more cracked.com (*These are especially funny because Halloween is not so much practiced in many of the countries represented rather than imported as a money-making scheme…and a very odd one at that.):

The 30 most unsettling German Halloween costumes

The 30 most unsettling Japanese Halloween costumes

The 35 most insane Halloween costumes from around the world

And another reason why I love Portland…their annual Zombie Walk <3:

Happy Halloween people, where ever you are in the world and whatever you choose to be today.

This pumpkin had a good night, but not a good morning...

2 thoughts on “In Honor of Halloween”