Apparently, with the popularity of the FX television show, It’s Always Sunny in Philadelphia which debuted in 2005, many people have created drinking games.

A quick Google search landed 3.400.000 results (whoa). While my husband and I are new to the show, only having watched three seasons and are currently on the fourth, we haven’t played a drinking game for many years. Another Portland friend was visiting for the week between Christmas and New Years Eve and after the sightseeing around the area (central SW Germany [Trier], Luxembourg [Luxembourg City] and central SE France [Metz]) we would end each night with marathons of It’s Always Sunny.

Immediately, to make watching the show a bit more interesting and to share some of the large quantity of schnapps we purchased at a Weinachtsmarkt in Traben-Trarbach (not realizing that the same schapps can be found in our town YEAR-ROUND, oh well).  Realizing only after the fact that hundreds, if not thousands, of people also had the same idea about a drinking game related to this show. I imagine it is hard not to create one, or play one because of the nature of the show. 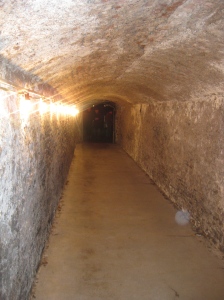 Toward the Weinachtsmarkt in Traben-Trarbach 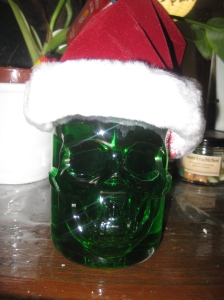 My husband is SO proud of this bottle of peppermint schnapps, least not because of the bottle itself.

For those unfamiliar with the show, which is set in south Philadelphia (hence the name), follows “the Gang” which includes twins Dennis Reynolds and Deandra “Sweet Dee” Reynolds (the actress who plays Dee is actually from Oregon!) ; their friends Charlie Kelly and Ronald “Mac” McDonald; and Frank Reynolds, Dennis and Dee’s father (although not biologically, as they/we later learn), as they run a bar and lead their lives. I have to admit though, other than really being a prop itself and not just a set location, “the Gang” really doesn’t do much ‘running’ of said bar…they can be seen drinking in almost every seen inside the bar and not much actual ‘work’.  This point is actually important to the development and understanding of the characters as they are very selfish, self-involved, greedy, manipulative…I’ll end there but the list of their ‘key characteristics’ is long and showered with nothing sunny, polite or in any way nice, which is also important to the shows storyline. I believe this show is so successful because the characters are without remorse and unappologetic about being so self-centered, who are not afraid of ripping it to anyone, especially each other and their family. No one is safe or exempt in their world.

We began by watching an episode and took notes about the repeated things the characters did…and estimating that we should think of 15 to 20 rules for our game. In the end, we ended up with 33 and decided that for the next night we would refine the results. Here is our list:

I don’t know why it has taken us so long to get into this show, it is great! Perhaps it was knowing that Danny Devito is on the show beginning in the second season and I have mixed feelings about him as an actor. I love the first season especially, I think in part because of the graininess of the camera work while the subsequent seasons seem such more professional and filtered. Perhaps it is the fact that while my husband and I are beginning to watch more television than ever before, this show is like nothing else we’ve seen. These people really have earned the moniker of the most hated people in Philly if not the rest of television and the country.  However, our marathon watching of the show required a break after the hostage episode of season 3, episode 4 (or show number 21), “The Gang Gets Held Hostage“. I felt a little bad about it since I had loved every episode preceding this one, and perhaps it is my dislike of this episode was the reference(s) to “Die Hard“…I know, my husband and many of my male friends will likely burn me for not really likely that movie. One good thing of our marathon viewing sessions includes realizing just how many episodes have been directed by “Kevin Arnold” from the late 80’s television series The Wonder Years,  who is known in real life as Fred Savage. YES! As a side note, Fred Savage has also directed fifteen episodes of the ill-fated series, Party Down  which you should find and check out, especially if you have ever lived in L.A.

Do you have a favorite drinking game related to this show or know someone else who does? Please tell me about it in the comments section!