This years Christmas and New Years Eve were spent at our home in Germany. First, while walking home from the night course I teach, the vendors at our Weinachtsmarkt were removing the decorations from their stalls, so I said to my husband in English that we should see if we could get a tree.

Immediately, a young German girl responded and asked us if we really wanted one. We said sure, surprisingly at the somewhat randomness of the act, then took a small tree back to our house.

My husbands’ and my Christmas Eve was very quiet, we ate artichokes in white wine, a recipe I picked up from my friend and fellow blogger Lauren Brassaw.

Since our American friend is so far from home and family traditions I wanted to create a special Christmas feast to make her feel welcome and not so homesick. So, the next morning we opened presents from each other and ate candy put in the stockings I made, then I started cooking!!

A huge Apple Pie for a traditional American Holiday

I made an apple pie, roast chicken, broccoli, more artichokes, salad and mashed potatoes with gravy (both vegetarian and from the chicken stock). Our friend set the table and made a nice centerpiece from the candles around our house and some of the mini disco balls I bought for NYE (sorry pictures won’t load…perhaps in the future they will).

After dinner we moved to ‘the couch’ and ate apple pie together while chatting on Google+ with a friend of ours and laughing so hard we cried. It was a good day!

New Years Eve was different. While there was no pressure for Christmas and the baking and events were a sort of present in themselves to my husband and my friend, NYE here held a bit of pressure. Our friends all decided to spend NYE in town, because none of us had yet to do so. My husband and I live in the city center, which for years we have heard turns into Bedlam on NYE because of all the “Treviris Gangsters” and yocals that get drunk and shoot fireworks at each other and passersby while also destroying property. YIKES!

Amazingly fun and good except now my husband is convinced that the Swiss must be the laziest cooks on the planet between this and fondue.

The directions for dinner include:

a) popping the reconstructed crackers that were brought special from England which our friend was forced to pop before boarding the plane (even though the crackers were in the checked luggage). So, I re-wrapped them, unfortunately without the traditional ‘pop’ effect. However, they did have many more goodies in them than the traditional crackers (we added more jokes, candies, and fireworks).

b) thinking about something (an event or a memory [big or small]) that you want to put behind you, that you want to wash your hands of and write it down on the white paper provided on your plate). Hold onto it, it will come in handy at midnight.

c) thinking next about a hope, dream or a desire you would like fulfilled in the new year. Do not write it down just yet, just think it over.

After dinner we had drinks and nice conversation until it was time to go outside. My husband spend a lot on fireworks at this time of year, I think partly because he misses not being able to get them for July 4th.

When it was time we descended on the Hauptmarkt to find many others who collectively created a barrier to the actual center of the square where people to turns lighting their fireworks. I bet that many of the fireworks would have been illegal in Oregon as they looked rather professional grade and there was no scheduled and sanctioned official city display that night. It was all just locals.  Furthermore, for all our commiserating about how rather nervous we were for chaos, none unfolded. It was amazingly calm and at least from my perspective, a great way to start the new year feeling like a real part of a group or collective, which has been rather challenging this year especially because of my language skills.While we were on the square we also burned the slips of paper with the situations we wanted to leave behind.

Dessert was chocolate fondue after celebrating the coming of the new year. It was during dessert that I asked everyone to write down their dream/hope/desire for the new year so they can take it home and remember it!

In the end, a good night overall!!! 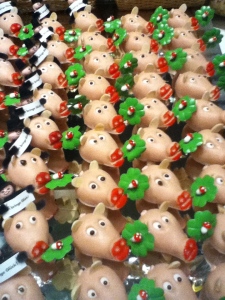 2 thoughts on “A local Christmas and New Years Eve”